Simply enter your keyword and we will help you find what you need.

What are you looking for?

Good things happen when you narrow your focus

Write us on [email protected]

The four murals were installed over several months late 2019, either hand-painted on the wall or painted on canvas, digitally-reproduced and installed on durable vinyl. They are all located on Broadway between the Hollywood Freeway and Cesar Chavez Avenue. Judithe Hernández’s La Nueva Reina stands seven-stories tall overlooking the Hollywood Freeway on the west side of Broadway. On the opposite corner is Jose Lozano’s Aliso Dreams at five stories tall. Family Tree by Miguel Angel Reyes welcomes residents and visitors at the development’s Broadway parking garage entrance. Barbara Carrasco’s Movimiento is located at the future headquarters of The Cesar Chavez Foundation.

“LA Plaza Village will make a lasting and impactful statement to the historic roots and presence of Latinos in Los Angeles through the works of these four talented artists. The artists were selected based on their creative ability to capture the essence of the Latino experience in Los Angeles, and we believe their art will distinguish LA Plaza Village as one of the most captivating and inspiring developments in downtown. Much as El Pueblo pays tribute to our proud history, LA Plaza Village recognizes our bright and promising future,” said John Echeveste, CEO, LA Plaza de Cultura y Artes. 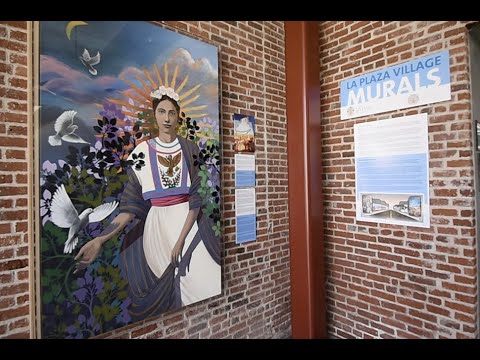 LA Plaza de Cultura y Artes—LA Plaza—is an institution of stories that makes known the role of Mexicans, Mexican Americans, and all Latinos in shaping the past, present, and future of Los Angeles. They share these stories through permanent and changing exhibits, educational initiatives, and a diverse range of public programming.